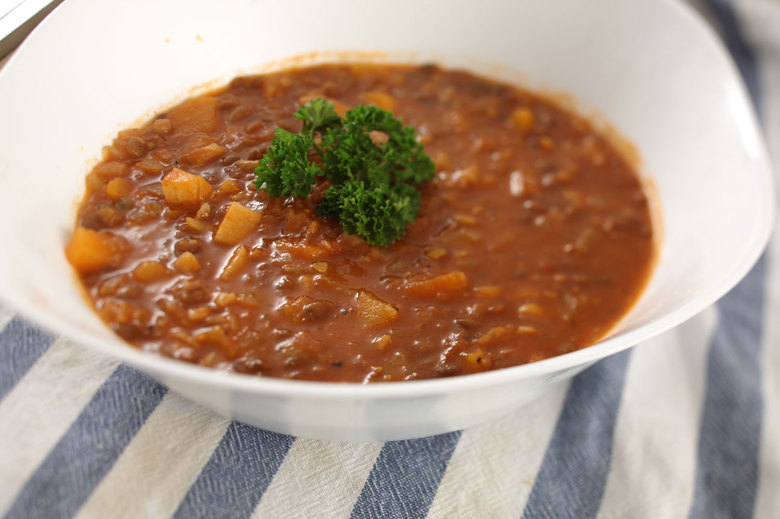 Beef stew with chickpeas and potatoes, popular in ex-SSSR states.

Tamara is Armenian coming from Azerbaijan's capital Baku. As a twelve-year-old girl she was forced to move to Russia where she was not accepted. She was not of "proper" nationality, her brother was severely beaten because he is Armenian and had to spend a long time in the hospital due to injuries sustained. When her daughter was attacked in the school yard, she decided to leave Russia and come to Croatia. She lives here with her husband and two children who are attending school. She is taking a course for a hairdresser. In Croatia, which shares certain culinary characteristics with Armenia, Tamara often bakes cream-filled cakes in the summer and pastries for the family, makes soups and stews and prepares the meat when they have money to buy it.

- When I was 12, I had to move from Azerbaijan to Russia. In Russia it was bad, we were not accepted. When you phone about a job, they ask you what’s your nationality, and if you’re not Russian, you can’t get a job. And when you come to a job interview, they immediately see who you are and again - nothing. They want only Russians. My brother had served in the army for a long time, he returned beaten up because he was Armenian, and spent a long time in the hospital. It was not good there, and, well, we suffered. When my daughter started school, I thought it would be better, they will behave differently, that the times have changed. But I was wrong, everything was as before. You can’t go to school and be alone in the school yard, you are immediately attacked. I've decided that I do not want my daughter to have the same life I had. We came to Croatia. One day she came all smiling and surprised from the school. "Mom, they do not believe me when I say that I came from Russia, they think I'm a Croat. They do not see the difference. So they asked me to say something in Russian. I began to count один, два, три... " It's nice for us here, they do not behave badly towards us because we are Armenians. As it should be, normally.

I am Armenian, but I've never been in Armenia. My grandmother moved to Azerbaijan when she was young. Everything I cooked was in Armenian way as my grandmother taught me everything.
Tamara’s favourite childhood food are eggs with tomatoes. This simple dish requires only 3 tomatoes, peeled and chopped into small pieces, a little bit of oil and basil, salt and pepper to taste. First, sauté tomatoes and when they’ve softened pour over the beaten eggs. Fry until golden, then turn to seal.
- My mom and my grandmother were making eggs with tomatoes for me. But more often my grandmother. Mom and dad worked all day, and the grandmother was taking care of me, my sister and brother. In the evening, when mom and dad came from work, we all sat down and ate together. I can’t remember what we talked about over the food, it was a long time ago. Even today I eat eggs with tomatoes and prepare it for my children. Sometimes I add spring onion and it’s very tasty. My other favorite dish is Bozbash, the same one that grandmother taught me to cook. I’m cooking it nowadays, when I have the money for the meat.

Here, I cook for myself and my children. After the school, we all eat together. I’m learning Croatian with my children, they already learned it so it’s easier to learn with them. When I cook, I ask them how do you say this or that in Croatian, but they say they don’t know because that’s not what they learn in school. Croatian and Armenian cuisine are similar, at least I can find all the ingredients that I need. In the summer I make cream-filled cakes and pastries that are made here, and I cook soups and stews when I have money for the meat. I miss the lavash flat bread. Lavash is baked in clay ovens after the dough is thinly rolled. I cannot make it here, I could only make it at home. I can do dolma here. Dolma is similar to sarma, the meat is wrapped in vine leaves and cooked. Now I have the vine leaves in the courtyard of the building in which we live. Except with meat, it can be stuffed with onions, garlic, tomatoes, zucchini and cucumber.

Armenia and Azerbaijan have long been in conflict over territory. Nagorno-Karabakh or Mountainous Karabagh, officially the Republic of Nagorno-Karabakh, is a territory in the southern Caucasus. Nagorno-Karabakh has long been the scene of ethnic tensions between Christian Armenians and predominantly Muslim Azeris, but they were suppressed for decades under the Soviet regime. In 1988, two years before the collapse of the USSR, attempt of Nagorno-Karabakh to join Armenia has led to armed conflict. The war, in which Armenia joined and where Turkey indirectly supported Azerbaijan while Russia and Iran supported Armenia, lasted until a formal cease-fire in 1994. The war ended with secession of Nagorno-Karabakh, but it has not been recognized by any country in the world except Armenia. In the war 30,000 people were killed and some 100,000 displaced.
Russian Federation is by the size of its territory the largest country of the world. After the collapse of the Soviet Union, in which Russia was the most important member, in 1991 a democratic regime was established, but the transition from socialism lead to a severe economic crisis, which has further burdened the already poor population. The solution for poor economic situation was found in oil exports, on which the Russian economic recovery was based. Despite the officially democratic system, the state of personal freedoms and human rights in Russia is declining.

Republic of Azerbaijan is a state in South Caucasus with access to the Caspian Sea. It has borders with Russia to the north, Georgia and Armenia to the west and Iran to the south. Its total land area is 86 600 square kilometers which places it on the 111st place in the world by size. The population is estimated at 9.165 million. The capital city is Baku, with other major cities like Gaja, Sumqayit and Mingachevir. It is an independent state since 1991, before that it was a republic within the Soviet Union. Armenia was the first of the non-Baltic states that declared independence from the USSR in 1990. After the official recognition in 1991, economic crisis and armed conflict broke out, and after that the war between the Armenians of Nagorno-Karabakh and the state of Azerbaijan. The war ended in 1994, but the Armenian border with Azerbaijan and Turkey, which later joined the conflict, have not yet been defined. Poor economic situation still persists and the human rights situation is very bad. The attacks on activists are frequent, freedom of assembly is not respected, corruption is frequent, elections are set, freedom of speech is violated, LGBT rights and women's rights are the target of attacks by Armenian nationalists. Military and political officials abuse their powers, and Armenian laws do not meet international standards. It is known that the police uses torture as a means, and the conditions in prisons are of the lowest level.

In recent years in Russia numerous cases of restriction of freedom of speech and civil society activities were recorded, legally unjustified arrests and show trials, illegal detention, attacks on minority ethnic groups and members of the LGBT population and unequal and discriminatory treatment of women and children without parental care, but the main reason for leaving Russia is still persecution on the basis of political opinion. Since February 2014, the Russian occupation of Crimea lead to new significant human rights violations in the area, especially when the rights of people of Ukrainian nationality are cincerned.