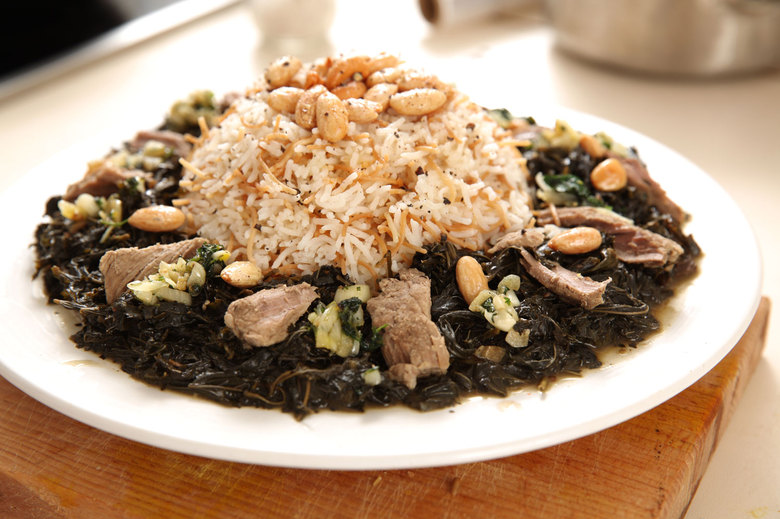 A traditional dish that is usually served in Syria during holidays.

Nader used to eat molokhia with his family on Fridays. Molokhia was a favourite dish of his late father. His father studied medicine in Croatia, where he met Nader’s mother and moved with her to Syria 30 years ago. Three and a half years of life under war conditions in Syria and military conscription forced Nader to leave Syria. He came to Croatia, where he joined his sister Sandra. They both lived in a foster family, and now, after they enrolled in Croatian language course and in college, live in a dorm. Nader is missing Syria, he is concerned for his mother, brother and the lives of the rest of the family.

Molokhia is prepared and eaten on Fridays and holidays. Friday is a day off work, therefore, at 2 or 3 o’clock we all sit down and eat together. We all eat from the same plate, it is a custom in the Arab world. Our family often eat each from our own plate. Dad changed his habits in Croatia, so we eat each from our own plate.
My dad lived in Croatia for ten years and there he met my mother. He studied medicine. He was a paediatrician. My mother is from the town of Daruvar. She is a graduate in physical therapy program. For the last 30 years she is living in Syria. Mom likes to read cookbooks and searches recipes on the Internet. She often made sarma with beans and fried chicken. My favourite is sarma, but I do not know how to make it. It’s difficult, it would take me two hours just to wrap it.
My sister is a good cook. Sometimes she taught our mother some things. I love sweets in Croatia, potatoes and plum strudel.

I miss Syria. I was born there and I lived there for 23 years. I miss many things: my friends, my street and my house, the food. The situation in Syria is bad, there is no running water or electricity, except sometimes for three to five hours a day. You're never sure what will happen. Everyone is at war. People pay with their blood. Many people died and many fled from Syria, they estimate about 800,000 people. We do not know where some people are, they have disappeared. In Damascus it is somewhat better, but you never know when the bomb will explode. There are six million people in the city. Even bigger disaster is coming. I want it to be peaceful and this war to end. For four years we’ve been in a war, and people have paid with their lives.
The whole world must make an effort to establish peace there. There are many terrorists all over Syria. If the things don’t calm down, the situation will escalate in Lebanon, Iraq, and Turkey.
My family lives there, my brother works in INA (Croatian oil company). He has a wife and child. Mom lives there alone, but she has good neighbours who watch out for her, they keep her well. Every day, when there is power, I speak to my mom. I talk to her on Skype. She tells me to get a job. I’m an economics graduate.
I want to go back when there’s peace. I lived in the war for three and a half years, I did not want to go to the army.
I feel safer in Croatia. There is peace. The state is good, the people are good, I have not heard that in Croatia it is as bad as in Syria. I’m learning Croatian language and new words. We have a good group and a good teacher. I have problems with the cases. I know the vocabulary, I differentiate present and future tense. These things do not exist in Arabic language. Arabic is not the most difficult language in the world, as I used to think. I’ve been learning Croatian for only a month and I'll finish the first stage by the end of the year.
I live in the student dormitory "Stjepan Radić”, in the room at the beginning of the corridor. It’s very noisy and I cannot sleep. I'll ask for a room on the second floor.

Throughout the history, territory of the Syrian Arab Republic was the centre of many developed civilizations. Syria declared independence in 1941, and from then up to the present time it often participated in various conflicts and wars. From the declaration of independence until 1970 the country was politically unstable, there were frequent coups, changes of governments and political systems. Hafez al-Assad seized the power in 1970 in a coup. He organized the governance by giving minor concessions to political opponents that were popular in the country, but firmly kept control in his hands through the political and military repression. Rebellions against the ruling regime have often been violently repressed. After his death in 2000, his son, Bashar al-Assad, took over the government. In 2011, as a result of events in the Arab world known as the Arab Spring, there was a culmination of discontent and a start of a movement called the Syrian uprising. In cities across the country demonstrations were held against the regime in power, and the Government has responded by sending the army to crush the protests. Very quickly, an opposition military force was created and called itself the Syrian Liberation Army. That was the beginning of a bloody conflict, which is still ongoing and has caused one of the biggest refugee crisis in history.

Since the beginning of the conflict more than three million people have left Syria, which is 113.5 people per thousand inhabitants, and the number continues to grow.