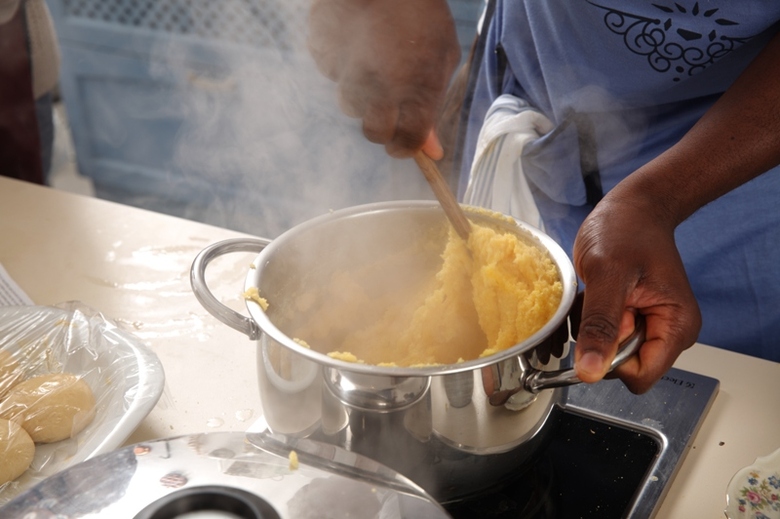 This traditional Senegalese meal is a combination of beef and fish with rice.

Sadiou remembers his favourite childhood dish, soupou kandia, that his mother made for him. Although he is originally from Dakar, he lived with his uncle in the south of the country, in the area of different culinary traditions. He misses his family a lot. He lives in the Reception Centre for Asylum Seekers and awaits a decision on the asylum claim he filed upon arrival in Croatia. He had to leave his country, but he would love to be there now.
The food is different there. Everything is made with rice and a lot of vegetables. That is very traditional. Meat is prepared more often than fish. Everything is different, and the capital city looks completely different from the rest of the country. It’s just a different culture. To prepare the food I ate there, it often requires a lot of different vegetables. I know how to make these dishes because I watched how they made them in my family. If mom cooked, I would watch how she’s doing it and memorize. When you're in Europe, you try to cook alone. No one helps you. I never wanted that my girlfriend cooks for me. That's my philosophy.

I know a lot more about the south of my country. I would go home just for a week or two to visit my family and then I would return to my uncle. In Senegal, Muslims are the majority. I went to the mosque here twice. It was my first time in Europe that I went to the big mosque. I like that. I thank God that I can go to the mosque here and I see Muslim people. That's why I really like this country. God bless it. Indeed, I was very surprised to see such a big mosque, like those in my country. I'm so happy.

On the last day of Ramadan, in the morning when we get back from the mosque, a special breakfast is prepared with cereals, couscous and yoghurt. It is sweet. Then for lunch we make chicken, fried potatoes and sauce. Other types of meat may be used, but chicken is important, everyone most often prepares chicken. First you serve the potatoes, then the sauce on the side and then chicken. And bread. It is prepared when Ramadan finishes, in Eid.

The whole family usually eats together. Mother, father and the kids. We eat from noon until 3 o’clock. We eat dinner after the prayer - after the last prayer, between seven and nine o’clock. We use spoons or eat by hand. Knife and other accessories are something you get in a restaurant, but at home you use a spoon or your hands. When we eat pasta, then we need a fork. I eat by hands. During the meal we do not talk. This would mean disrespect. We do not sit at the table. A tablecloth is laid on the floor and we use small chairs arranged in a circle to sit. There is no special places. Everyone sits wherever they like. Sometimes in some places only the father has his place.

At my uncle’s, we mostly used salt, it’s very natural. We did not want to use chicken cube (it is used a lot in the preparation of rice in Senegal), curry and the like. We use traditional and natural ingredients. Therefore, salt, but not too much. It is used only for the preparation of rice and fish. To make thiéboudienne you need salt, pepper, garlic, oil, chicken cube and onion. The onion is prepared with black pepper and garlic. Mix it up and put inside. It is very strong. If you want it to be red, add some tomatoes.

I tried a lot of different foods in Croatia, but I don’t know the names. Food in Porin is a novelty for me. I think that is Croatian food, for all I know. In Croatia, I live in Hotel Porin. People who work there are Croats. I never went to a restaurant, I ate only in Porin. Once I tried kebab outside, but I think that’s not Croatian... The smell of food is not the same here. I mean, it's very strong. Salt, pepper and red paprika in particular. In my country we have a special red pepper. You put it in the food and it’s very strong. But my family does not like it. You shouldn’t put too much pepper. The feeling is not the same. There’s a big difference.

I miss my family. When I think of them, I cry. That's why I say that I do not want to eat a lot when I'm eating alone. Sometimes I think about how it would be if my uncle was here, and his wife. There were four of us. My uncle had a wife, me and my cousin. A small family, but it was beautiful. A small problem, and for that reason... But it was very good. When I eat, I remember that, it was very nice. When I went to my true family, blood family, it was also very good. If I missed my mother, I could go and visit her. My uncle would tell me to go there for a week or two and come back. Sometimes we would go together.

I really, really miss my country. Too much. Why had I left my country? Why do I miss my country, why? I was born there. My uncle died before me. I knew my uncle better than my own father. But he died before me. Because of me... I was crazy there, and now it hurts too bad if I think about it. I miss my country, where I was born, lost my family, my everything... But now I'm calm, I feel a bit better. I returned to myself. I don’t care for money, I just want to take care of myself and my peace. You ask me if I miss my country; I miss it. So I do not follow what is happening there. When I see my country, I remember a lot of things. I do not want to remember. Because I do not want to see anything. I never wanted to leave Senegal. Never. Why? I am a Muslim, I do not want to lie to you. Never. I regarded my uncle and aunt as my father and mother. Family? When you lose a family, it's not good. If the situation was better or if it was not like this, why would I come here? I wish I could see my mom and dad and my late uncle for a second. If I could see them only for a second ...
I hope to be happy in five years time.

The territory of present-day Senegal was inhabited from prehistoric times by different ethnic groups. In 1960 former French colony gained independence and Léopold Sédar Senghor came to power. Until 1980, it was ruled by moderate socialism that relied on the support of France, but also on Muslim religious hierarchy. Stagnation and then the economic downturn of the 80s lead to political instability. In the province of Casamance in the south of the country separatist Casamance Movenemt of Democratic Forces (Mouvement des forces Démocratiques de Casamance) appeared. Armed struggle for independence is still ongoing, with varying intensity, although since 2004 there are talks about signing a peace agreement. Today, Senegal faces the problem of forced child labour, a wave of violence against LGBT population and very poor conditions in healthcare.